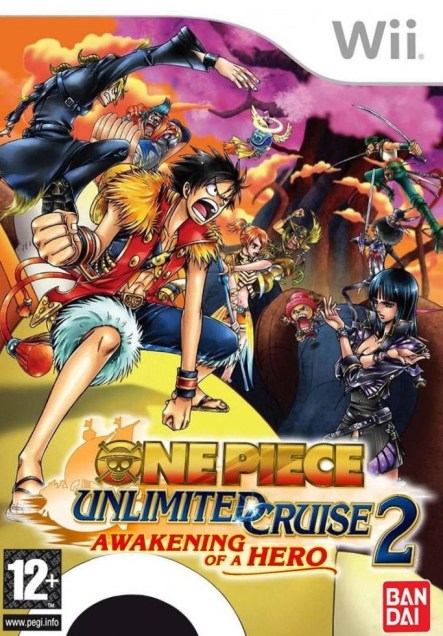 The first Unlimited Cruise was quite the crap game, but it was a crap licensed game, so sequel…. i’d say, but i simply don’t believe this wasn’t a game split in two separate – AND full priced, too – titles just to maximize profit, as i will explain in this review.

Last time we were left with a cliffhanger of Gabri being reduced to a ball of energy, and the island literally becoming alive. The Straw Hats escapes the monstrosity and instead of just leaving Gabri being “offed” (which he deserved because it was annoying), they assume that a lot of energy is required to bring Gabri back to its physical form, and decide to venture back in the archipelago to face the Trials once again, to gather energy/power, restore Gabri and fight the literal monster island.

I dunno, killing off Gabri was quite the “win” situation for me, since he literally the source of the many issues with the gameplay, they all somehow spring forth because of him. So it feels like contracting a veneral disease, get cured, and then contract it on purpose, thinking “that syphilis fella wasn’t so bad after all, i shouldn’t have been so mean to him”.

And – as before – you’ll get any substantial story only at the very beginning and end of the game, with filler and fanservice sandwiched in between the lousy start and the ending, where anime cheese happens, you get to know things that aren’t important since it’s non-canon, and Gabri basically “does the Pinocchio”. There are info and backstories about the irritating “thing” lazily created by Oda for these games, but are all on optional, hidden Poignee Griffes (one of the few actually optional things in this damn game), and aren’t exactly interesting. 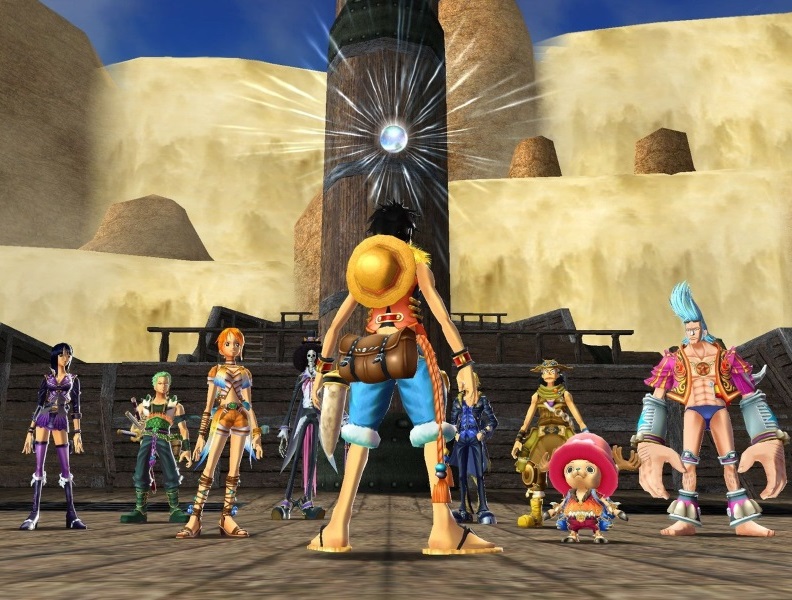 Since the gameplay is identical to the first Unlimited Cruise title, i’m gonna direct you to the review of the first game, to avoid repeating myself (more than i will, anyway).

In that i pointed out how you could use the save data for Unlimited Cruise, to import abilities, moves and even some branches of the crafting tree, and you can do that, which saves you some grinding, but fear not, by the end of the first isle you’ll have Gabri back (with a new design, better or worse… i don’t know, still sucks), and even with this procedure, you’ll end up in the familiar and laborious black hole of grinding, farming and backtracking like a fool. In case you didn’t do enough of that in the first part/game.

The islands are all different and new, even though one reuses so many assets from an island of the first game, so much that it becomes a copy with small variations, but then again, the recycle of assets from Unlimited Cruise 1 is rampant and not an one-off situation. There are new models and stuff, like new characters bosses you encounter (like Eustass Kidd, which shouldn’t be here, but then again, non-canon), which is something but doesn’t change the fact you will engage on a deeper fight with the game, exploiting every cheap shot and move you can before the IA does it.

There are some runaway ideas, like how in the fight against Doflamingo, he’ll use his Devil Fruit’s ability to turn one of the characters in the team agains you (and the use of of a “salt” item to finish off/purify the zombies in Thriller Bark, nice nod), but like it matters, you’ll keep spamming a couple of moves, abuse the shit combat system and bring a shit ton of healt recovery items, because the game will be cheap and abuse the system as well, with two bosses – or 3 mini-bosses – in a single boss arena (which this game likes doing, a lot more than the first one), etc. etc.

But even if you think you got used to this crap, the game will make you fight Odr, which has a lifebar 3 times bigger than a regular boss, he almost insta-kills you, but it’s actually just a matter of patience, once you figure out his pattern and have to chip away at the ludicrous amount of health of the undead giant. Because fuck you, no other reason, and the final boss battle is the same, of course.

Also, now there are vehicles… kinda. The submarine is just a cutscene, and the Mini-Merry is used (with some agency given to the player, in this case) only in the bog of the Thriller Bark-inspired island. Maybe there are more vehicles and stuff to build, but that would require more grinding and farming, so i won’t ever know and i won’t care, at all.

TONIGHT, ON “IT’S THE MIND” WE EXAMINE…. 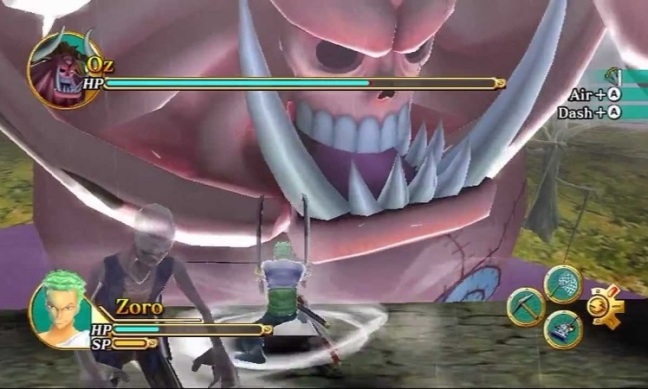 For the rest, is the same identical charade of shit game design and infuriating backtracking, with the game that expects you to just * know * to go out of your way, just looking at you in a mockin glare, what, you DIDN’T knew you had to do this random thing to progress in the island, to construct a tank out of soap and straw to destroy the hidden passage containing whatever you needed? Even if you think you won’t be frustrated as much since you already faced the bullshit of the first game, the game will find a way to thwart any attempt to guess what the designer wants you to do.

In the first game the supreme bullshit moment was the game forcing you to do a random secondary quest to obtain an upgrade for the vacuum cleaner, so you could vacuum poison walls away and fight the island’s boss. Here you have to guess that you need to dig up a buried treasure (containing an item essential to upgrade the crafting system), its location marked in a map that you can obtain by collecting its pieces, which you could or could not have not already done. Not that you could guess that, or the game is giving you any hint or direction whatsoever.

For whatever reason, this time there’s more emphasis on fishing, which means more crafting and scavenging to upgrade the rod and the fishing hook, so you can fish on longer distances, and try to catch a lot harder species of weird marine life, which makes the mini-game itself more frustrating and forces you to get better, sucking out the fun of an otherwise well executed mini-game that works well with the Wiimote. 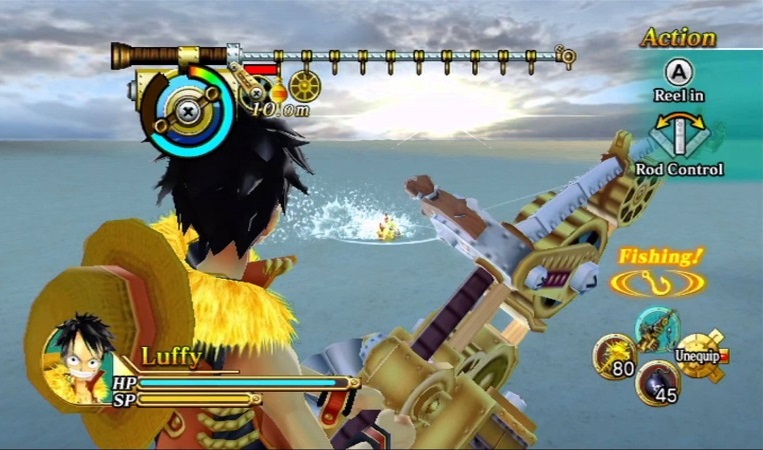 To really hammer home the feeling of “we made two games out of one”, the game is identical to it’s precedessor from a technical standpoint, only with lack of lyp… movement, with the japanese VAs throwing their voice off characters with sealed lips. I really don’t know if this already happened with the first title and it’s just more obvious here, or not, in any case is just laughable.

Also, there are more invisible walls, a thing more noticeable than before, and inconsistent to boot: you can’t pick up items that you normally could because the game doesn’t wanna let you climb on that specific rock formation (identical to ones you can jump on), you can move on some very small pools of water, but in other places there will be some invisible wall avoiding that you even dip a toe in the – i imagine – cursed puddle.

Lenght wise, it’s yet another 17/18 hours to see the ending credits roll, which is made more galling by the fact i imported my save data and stats from the first title, without doing so it would have took me even more. Even the frigging extra modes are the same seen in Treasure Beneath The Waves, i really don’t have anything else to say, and i already repeated myself enough.

If you’re a masochist and somehow didn’t had enough with the first Unlimited Cruise, here, do the same garbage for 18 hours, even more if you didn’t import the save data from the first title, so you can fustigate yourself with the same brand of endless grinding, farming, and wandering back and forth the same locations because the game expects you to exaust every possible option, to waste time guessing what stupid, backwards, unreasonable thing you are supposed to do, by hiding essential items needed to progress the main story in “optional” missions.

I said that before, and the gameplay hasn’t changed one bit: sure you have new islands to explore, new boss characters, but this really could have been included in the first game, as it really feels like a single game split in two separate ones to exploit the fanbase of a beloved series like One Piece…. i mean, it doesn’t “feel”, it’s a garbage title using a well know IP to sell itself.

A couple of okay ideas that give a nod the original series aren’t worth the aggravation of playing this one, not even for shock value, as in the main differences are hard to notice, just more emphasis (aka forced grinding) on fishing this time, and more boss battles that put two bosses – or 3 mini-bosses – in a small arena. And a small section where you kinda control a Mini-Merry… that’s it, it’s the same, identical breed of frustrating bullshit as before.

And the story is even more pointless and boring, by barely existing and being centered on an annoying character that doesn’t have even a good design, as Oda seems to have made him by obligation more than creativity, that you have to save despite wishing that wasn’t the case. Not that it matters, anyway, it’s not like it’s canon story or something (it ain’t, if you’re wondering).

Namco Bandai would later port both titles to the 3DS, and continue in the Unlimited “series” footstep with One Piece: Unlimited World Red (or R), which was actually a more than decent game, maybe we will take a look and talk about it, once i get a hold of the Deluxe Edition (a port with all DLC included for modern systems, it was originally a 3DS, PS3 and Wii U title) for PS4.

And if feel like kickin a dead horse, we might talk sooner or later about One Piece: Romance Dawn for the 3DS, that ghastly waste of time and money.