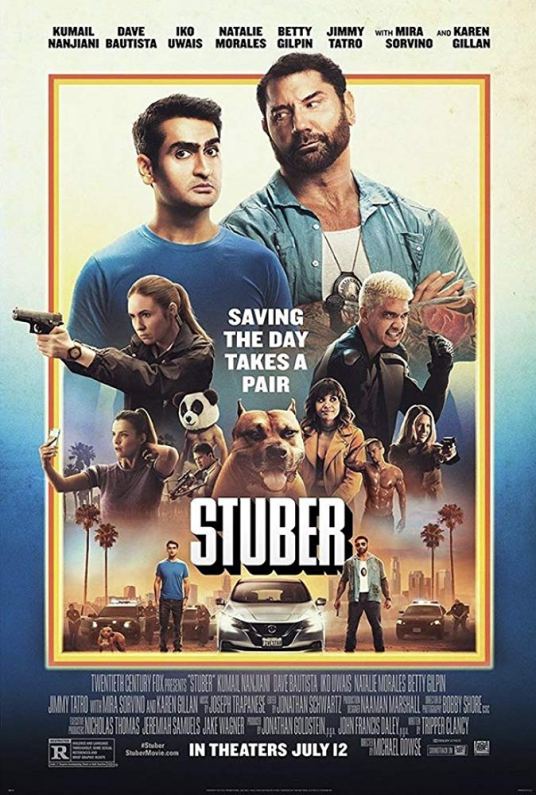 Here the floodgates have been lifted, so to say, and way too many movies came out last week in cinemas (hence why i missed Submergence by Wim Wenders, and why there won’t be an EXPRESSO review of it). I choose Stuber, mostly because of Bautista and Nanjani being in it, though the title is amusingly goofy enough.

Kumail Nanjani here is Stu, who alternates between his crappy job at a super store and his Uber career, trying to keep his star ratings up while having to deal with a douchy boss, the fickle variety of Uber customers, and an uncomfortable love-friend relationship with his crush. One day is called for an Uber drive by Dave Bautista (the character has a name, but who cares), playing a buff, grouchy and violent cop who is still obsessing over the death of his partner and wants to solve the case, stringing Stu along for his vendetta, who’d rather go to his lady friend/fuck buddy.

It’s a typical buddy comedy at heart, with two characters that couldn’t be more opposite to each other, forced to work together by the circumstances despite hating each other, that eventually develop a sense of camaraderie and mutual rispect, etc etc. There’s nothing new in this regard, and the characters are fairly stock, but deliberately so, with Kumail Nanjani and Dave Bautista doing the typical role you’d expect from them, the story is also clichè, but it’s done in a comfy way, not by making an half hassed parody of the genre, or a tribute, but just updating it for the “era” without misguided attempts to be subversive for no reason, or shame of being “just” a buddy comedy.

A fun crime comedy romp with Drax and Kumail Nanjani.