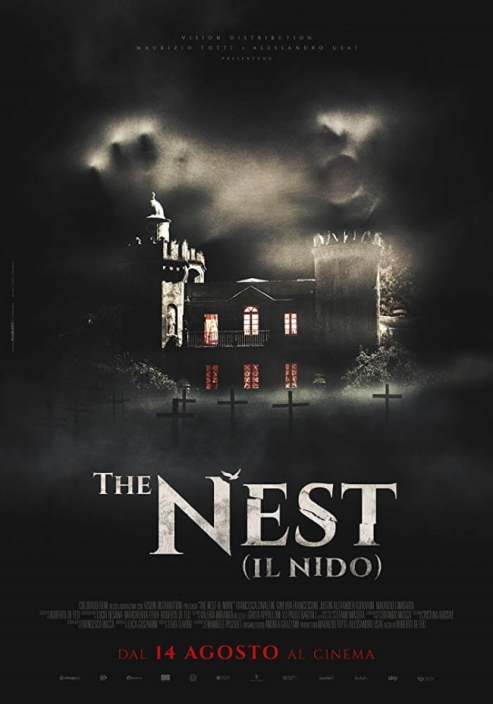 Oddly enough as it may sound, there’s not many italian horror movies screening in cinemas here in Italy.

So when i saw the trailer for The Nest, i was intrigued, even more because it didn’t look like one of those (relatively) cheap production when it clearly redubbed despite being filmed in Italy and with a lot of italians in the cast, like The Music Box/Il Carillon.

The story involves a wheelchair bound boy, Samuel, who is raised in this humongous estate, treated with a princely respect by his family and servants, all bound to the estate by a rigid set of rules set to ensur “the program” is respected at all costs. But Samuel feels more and more like a caged songbird, moved around by the wishes of his stern mother, even more restless due to the recent weird happenings and the arrival of a young girl called Denise..

The Nest is a movie with some good performances, a good atmosphere, an intriguing plot revolving the cultish family and the drama that inevitably festers in an enviroment like that, but it’s also a movie that reminded me of Hereditary. And i don’t mean that as a compliment, but here it truly feels like the horror parts were forced in by a producer, as they stick out like a sore thumb, underveloped, clichè and almost vestigial.

Then… the ending, which i’m just gonna spoil because it’s so fuckin stupid it deserves shame. Zombies. Out of nowhere, i’m sure the scriptwriter thought he established it before, but it didn’t, at all. I hate this ending because it doesn’t gel with anything, and reminded me of the shit Fragasso and Mattei pulled in the 80’s, i truly hate to say this about a movie with some self-respect and ambition.

P.S.: It’s worth noting that there’s another movie simply called “The Nest” , it’s a 2016 fairly obscure italo-swiss production (so it explains why they named this one “The Nest – Il Nido”), directed by Klaudia Reynicke, maybe more talked about after Love Me Tender, her new movie which had its debut in Swiss cinemas this 9th of august.