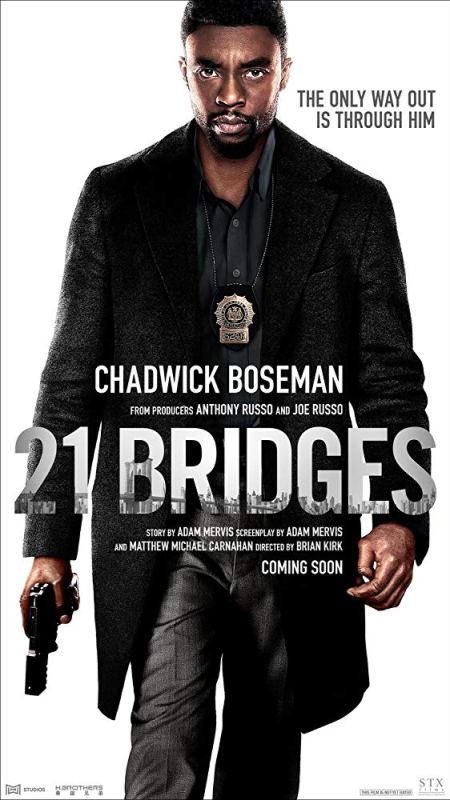 Here in my country this one (retitled “City Of Crime” because originality) was advertised highly on having Black Panther’s star Chadwick Boseman and being “from the creators of Avengers Endgame”, the marketing cleverly not specifing it’s just produced by Joe and Anthony Russo, and after watching it i realized why, the signals were fairly clear to begin with, and it’s not exactly a “con job”.

It’s just a ploy to get you to watch another cop thriller with a manhunt through the streets of Manhattan, or in these case, the titular 21 bridges (which isn’t actually correct, but whatever), closed in order to avoid the killers (guilty of killing many cops in a failed heist) escaping, but it has to be done all in one night, etc. etc. It’s not a bad setup, but it’s a fairly typical nonetheless, like the main character, the exemplary cop with an unbreakable sense of duty and justice, who finds his beliefs challenged as things get more complicated and he suspect of an internal conspiracy… not that you need that to explain corrupt cops, but whatever.

And it’s decent, even if you’ve already seen this kinda of plot and characterization many many times, with a great cast that’s a bit too good for these characters, not completely stereotypical ones, but – again – very typical. Direction by Brain Kirk (TV director on Boardwalk Empire, Penny Dreadful, GoT, etc. here at his movie debut) is decent-good, it’s fairly fast paced, doesn’t pull punchers, and there’s no tonal problems or unbalance in themes like the movie rooting a bit too much for the cops despite showing how blatanlty corrupt they can be, nothing like that.

If anything, the italian marketing will “dupe” people into seeing a perfectly decent – if fairly disposable – cop thriller drama.