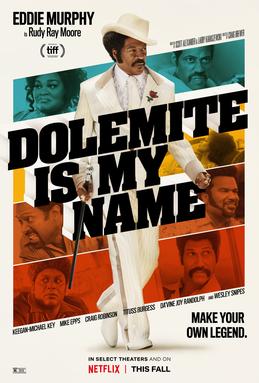 Time for me to get some use out my Netflix subscription, and this wasn’t gonna screen in Italy anyway.

Shame, because the idea of a biopic about Rudy Ray Moore, the comedian better known to film buffs as his character Dolemite, starring in the eponymous movie and the sequel The Human Tornado (and many others), is a great idea. Especially the first Dolemite is a legendary and beloved piece of blaxploitation cinema, one of the few films where the boom mic is visibly in the movie more than the villain, and with overall quality rivalled only by stuff like The Guy From Harlem.

Telling the story of Rudy Ray Moore, an aspiring 70s Los Angeles comedian that manages to finally find success with his alter-ego/character of Dolemite, a foul mouthed motherfucker in pimp attire, leading to do some comedy records, which brings him some fame and money, all risked to make a movie about the character, in spite of everyone’s advice and good ol’ common sense (like a 70’s black version of Ed Wood, in a way), but Rudy is not gonna have it any other way.

While it’s even better for film buffs that already knew of the story, it’s an amazing portrait of a man struggling to make his name known, to realize it’s dream, and his ambivalent relantioship to the Dolemite persona he doesn’t really identify with after all, but can’t also give up. And isn’t exactly a flattering portrait, but it shouldn’t be, and the script has a perfect balance of goofy and serious, with space for more somber (and not somber) self-reflection, but also to lovingly recreate ridiculous scenes from the first Dolemite movie, with a top notch cast (which includes Snoop Dogg/Lion), especially Eddie Murphy who is killing it as Rudy/Dolemite.