The first One Piece featurette, shown alongside the theathrical release of the second One Piece movie, Clockwork Island Adventure, and never re-released outside of Japan (even thought it was included in the japanese DVD release of the movie, if the wikias are correct), for reasons that will become clear, outside of its 5 minutes runtime.

Like the title “implies”, it’s a mainly a musical number featuring Jango, the secondary antagonist in the Syrup Village arc, a pirate hypnotist with passion for dancing and a very minor character overall. The plot sees him seeking refuge in Mirror Ball Island (which is actually kinda canon, as he had a mini-arc told via chapter cover pages in the manga, the Jango Dance Paradise cover arc, like the one narrating what happens after Ener reaches the Moon), but he gets so into the island’sgroove he ends making a fuss and attracting Marines.

By chance the Straw Hat pirates (still made of just the East Blue members, so this could take place anywhere between Arlong Park and Alabasta, since Jango still has a bounty on him) also are passing by, get spotted by the Marines as well, and Jango, while escaping, tries to hypnotize the Marines, but thanks to the disco ball, the hypnosis get amplified, taking everybody -even Jango himself – into a dance frenzy, leading to the island being – literally – torn apart by the mass booging.

As it’s pointed out in many One Piece wikias, the main reason of being for this featurette is “trojan horsing” the then now song, “Ready!”, by Folder 5, who already scored the second anime opening for the One Piece TV series, “Believe”, and this is probably the real reason this never got a western release, given the absurdity of music copyrights.

So, it’s not exactly made with the best intention, this is a marketing tool, it really is, but leaving that aside, it’s pretty well animated, i’ve seen better drawn frames and characters, but it’s smooth, even throwing in a POV chase sequence with a bit of 3D alleyways combined with 2D characters, and this is before the dance number starts, itself really well animated and synchronized (if shorter than expected), that’s Toei Animation for you, putting unmistakeable effort in a featurette.

The song itself has definitely an eurobeat flavor and it’s catchy enough, though it’s weird to see Luffy dance in a more appropriate manner on top of the town church… for some reason, shame there wasn’t time to make Zoro and Sanji awkwardly dancing together while managing to verbally fight each other, they just flash by Nami dancing with the Marines, even a random old man in his night gown manages to get more screentime in the brief dance number, rejuvenated by the zesty beat. XD

It’s cute, and has more “narrative” than expected, it’s not just an animated music video to promote Folder 5’s song. 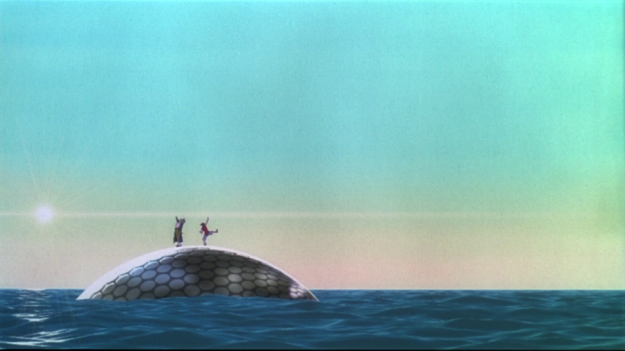