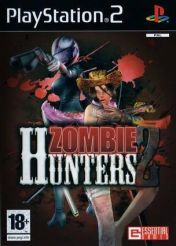 Yeah, once again, it was never released in the U.S., was released in PAL territories under a budget label, but there aren’t many copies around, so nowadays commands quite a lot of cash on the second hand market, not as rare and pricey as Kuon for PS2, but still, 60/70 bucks for this (i found it at a convention booth for 15 bucks, otherwise i wouldn’t have bothered) is a frigging lot, so much it’s a lot cheaper to just buy the japanese version. Or just emulate it, that’s an option.

Right off the bat, the story it’s confusing, because this revisions adds storyline for extra characters, and right off the bat you’re forced to play as the guest characters, Riho Futaba (D3 Publisher “mascotte”, the main attraction of Demolition Girl, and found in other titles under the D3 brand, like All Stars Fighter) and her sister, Makoto Futaba, who where shooting a movie, and suddendly are thrust in the same scenario, with a virus transforming the people in zombies, them bumping into Reiko that explains they were injected Cursed Blood in secret, which turned into blood craving murder machines, and they’re told there’s a vaccine.

All told in text dumps and slideshows, no voiceover either, but at this point i’m not surprised. I didn’t expect their “side story” to end in a complete fake out, but then again, makes about as sense as anything else in this game, so there’s that.

I had to read the intro text of the Aya’s storyline on Giant Bomb to know what the fuck the actual plot for Aya and Saki – you know, the main characters of the series – was, and i’m not surprised to know they basically retconned the ending of the first Oneechanbara, not that you couldn’t figure that out since Saki is in the sequels, but since the plot basically boils down to “another zombie epidemic did happen” regardless, who cares.

It’s so similar to the first it’s not worth going over the combat system or the level design in detail again, but there are some improvements and features to mention, as you now can bring two characters and switch them on the fly, which can be used to recover the blue segments of their health bar, and a second health bar of sorts, like you’d expect.

Every character now has it’s own playstile, even the guest characters like Riho and Makoto Futaba have their own moveset and feel different enough (Makoto for example was just Riho with a different character model), and of course Aya and Saki get new special moves to further vary their playstile, which replace the health consuming special attack from the first game, introduces ranged attacks (alongside a character with guns) and can be used to damage the Mudmen/blade sponge zombies without the “heart rip” move or going in berserk mode. And here you have both a map and a mini-map on screen, which alleviates some frustration. 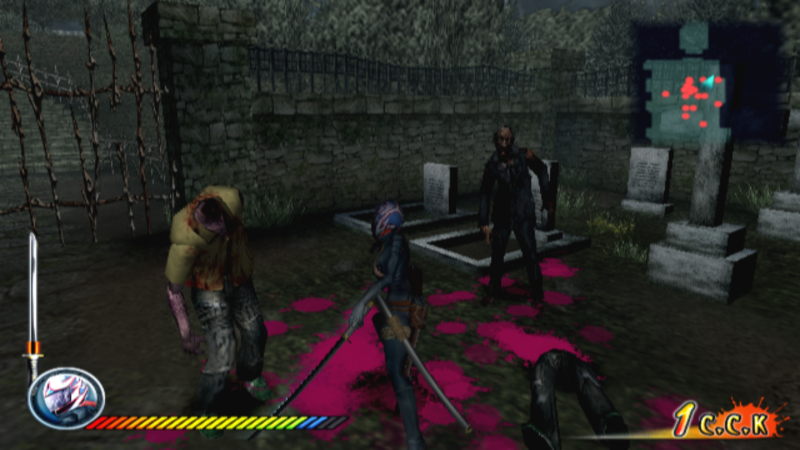 Controls are a bit less stiff so it’s easier to get a feel for the “cool combo/timing based combo” system, but there’s still no damn move list, and it’s not better enough to justify the introduction of “cursed tombstones”, which work exactly like the “combat statues” in Devil May Cry and you will end up ignoring because the controls are not precise enought to handle it, and there’s nothing to incourage you discovering this frankly obtuse combo system, because the game still doesn’t explain how you get more combos (the answer is by putting points in the “combination” stat when you distribute exp), or what the hell the inputs are, you’ll never know unless you download a move list, like this is Mortal Kombat in 1992 or something.

Hitting enemies still lacks much impact, the weird monsters and zombies still aren’t that interested in reacting to your blows until they start their own combos which tend to ignore your attacks if they aren’t strong enough, and more advanced enemies often are still just stuffed with hp so they take more time to cut them completely down and avoid being kicked in the arse by a half a torso, as usual, like being cheap shooted by a cop zombie – or more likely, three or four cop zombies – with guns situated somewhere in the arena or “hidden” by other enemies character models.

It sounds like a better experience than the first game, but of course this couldn’t be, so to “balance out” the improvements, it cranks up the bullshit factor even more, especially in the final stage, which is somehow even more drawn out than the one in Oneechanbara/Zombie Zone, and once again you’ll find yourself forced to grind exp if you wanna have a chance of putting up with the marathon of re-reused boss battles, now even more since you have to level up at least 2 characters.

And somehow it manages to out-do it’s own bullshit, with a final battle that the map and status screen consider as it’s own stage…. but it isn’t, as you will notice by quitting to the main menu, with the mission list lacking of that part, so i though i had completely wasted the 6 hours i spent on the final stage, but the game has mid-level saves, so i actually could retry the last boss battle. Not that it mattered anyway, since it was unbelievably cheap (even by this series’ standards) and i wasn’t levelled up enough, i thought i could do some Survival rounds to rack up extra xp, but doing this will erase the mid-game save data.

I eventually beat it, after grinding and grinding. Wasn’t worth it.

On the technical side, it looks a tiny bit better than the first game, but there are no voice acted cutscene at all this time around (not even a 10 seconds one), the “sexy models” are as attractive as Nintendo 64 rendered dutch wives, pop up of enemies is even worse than a PS2 era Dynasty Warriors title, the color scheme is still dull and muted, at times making it so dark that i managed to see what the fuck i was doing just because of the crappy fxs of the blades and sparks.

It’s unbelievable how collisions got even worse, with the character often struggling to get through a corridor despite being nowhere near the walls, and in one occasion an enemy glitched through the walls in a way that i coudn’t kill him at all (without killing myself in the process), at least with the auto-saves done mid level you can avoid wasting all progress, but it’s an improptu band aid for a problem that shouldn’t be there at all.

Besides that, the game recycles a lot of enemies and locales from the first game, with some new additions, but still, the continuous recycling of boss battles and enemies and everything is a big problem, once again, and sound department ain’t much better, with enemy cries being cheap animal roars taken from some free libraries (if they aren’t, they feel like it), the tracks are very generic rock, and when the music is somehow devoid of moans, the characters will provide, badly.

Sad thing, the audio design is still the most curated aspect of the game, unlike Senran Kagura where there’s a cacophony of music, sound effects and characters constantly talking or making sounds, here the music can be heard properly (and it’s ok, all in all) and you can hear distincly the pulling of triggers and so avoid gunfire in time.

Content wise, besides the story mode with 6 stages, you have the usual Survival Mode, the achievements collected under the Quest “mode/option” are more varied, and there’s a new mode, Practice, it’s what it sounds like, but i feel it’s excessive to have a 1 vs 1 fighter style training mode like this in a game with these controls. And – allegedly – there’s co-op, the game offers it for both story and survival, but since the back of the box says the game doesn’t support multiple controllers, i’m gonna guess it’s turn based, i don’t really care to find out, in this case.

And if you have save data from Dragon Sisters/Dragon Fighters (another D3 Publisher title), you unlock the main heroines of that game, making the roster rise to 8 characters. Even though it’s absurd that i had to finish the first stage with Reiko in order to unlock the frigging main characters of the series, it’s not even hard, it’s just obtuse and illogical.

Oneechanbara 2/Zombie Hunters in theory should be better than the first one, since it has better navigation (helps to have a map), more playable characters, which are made more distinct and equipped with new special moves, the controls are less worse… but all the improvements are really minor, almost imperceptibile, and the combat system is still a functional mess, with blows lacking a satisfying impact, a combo system as impenetrable as inputs for special moves (which are not intuitive or told in any way), and overall pure exploitation of cheap tricks, senseless backtracking and recycling of the same old bosses and enemies to the point of obese saturation.

If anything, it’s all made more frustrating and obscene by having another character with you, because the abysmal level design often doubles the bullshit you gotta go through to “counterbalance” the quality of life improvements, and you’ll be coerced into excessive grinding in order to pass some of the cheapest boss battles i’ve ever seen in a hack n slash, making the prospect of actually beating this one a grueling herculian task in the name of videogame self-flagellation, so much i post-poned this review by a year after trying to beat this thing, it’s so frustrating.

And i finished Velvet Assassin in “one go”, just for reference. 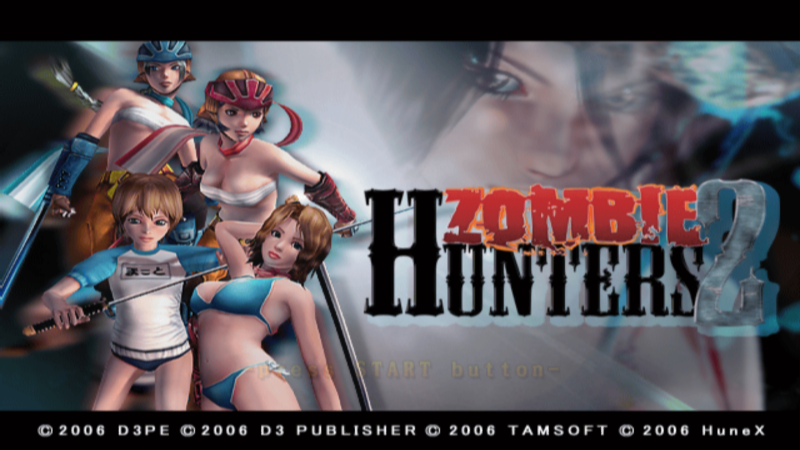 The icing on the top of this rectumal éclaire is that the actual story is hidden in absurd way, oddly the first thing available is the second scenario about guest characters Riho and Makoto Futaba (Riho Futaba being the idol/mascotte of sorts of D3 Publisher), not that Aya and Saki’s storyline is much better, since it boils down to “another zombie outbreak did do happen”, but it also retcons the ending (and pretty much the entire story) of the first Oneechanbara.

So, it’s both slightly better but also kinda worse than the original Oneechanbara/Zombie Zone, the only nice thing i can say it’s that it’s really rare, so the high price will keep most people away, and regardless if you buy or emulate it (do what you feel, i don’t care or judge), i don’t recommend it, just saying it again just to make sure. But if you must or are just collecting rare PS2 games, be my guest, i still don’t recommend actually playing it, unless you wanna frustrate yourself by noticing that this one had some actual potential, but Tamsoft spent more time on the boob physics than in making it kinda fun for more than 5 minutes. As it usually did.

We’ll talk about the other Oneechanbara games… next year, i had enough for now.