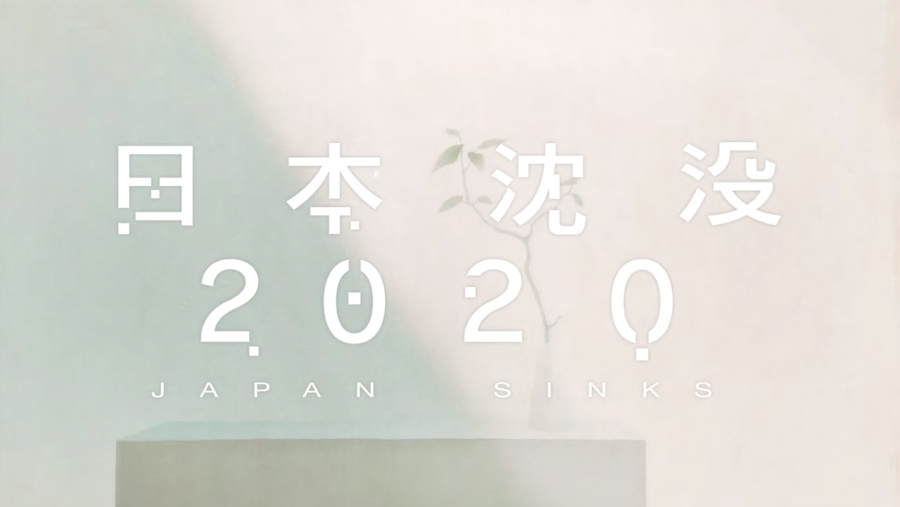 I knew this series was coming, but the surprising lack of hype, coverage and buzz on social media sites made me think either people forgot about this, or didn’t bother since most of the feedback from the dedicated sites was, with most of the comments expressing disappointement, criticizing excessive nationalism for the sake of it or just baffling stating stuff that – somehow – happens, like a grandpa “360° sniping” with a bow and arrows, etc.

This made me a bit sad, as i loved Keep Your Hands Off Eizouken (which i highly recommend, just go watch if you haven’t), and i don’t dislike Masaaki Yuasa’s work in general, quite the opposite, for example i love Kick-Heart, good stuff, Ping Pong The Animation is incredible, and his screenplay for the extra-surreal Cat Soup (another one i highly recommend) is quite good.

After pondering on it, i wrote a small blog post about the same apprehensions, and decided to watch the series since it’s a Netflix exclusive, and i do have Netflix, despite barely using most of the time.

It’s worth prefacing i never saw Tokyo Magnitude 8.0, not because of any particular stance, i just don’t particularly care for disaster movies about earthquakes. So – despite feeling like i have to- i simpley won’t be making comparisons to a show i never watched in any capacity. Sorry (??).

At first the “2020” in the title didn’t make much sense to me, aside from obvious goal to make it seems like it could happen any day, to ground it firmly into modernity (at least for as long as 2020 lasts). So i did some research and found out it’s based on an eponymous novel that’s quite famous for the japanese public (if the number and timing of his adaptations are anything to go by). And this originally launched as an ONA before becoming a Netflix series, btw. 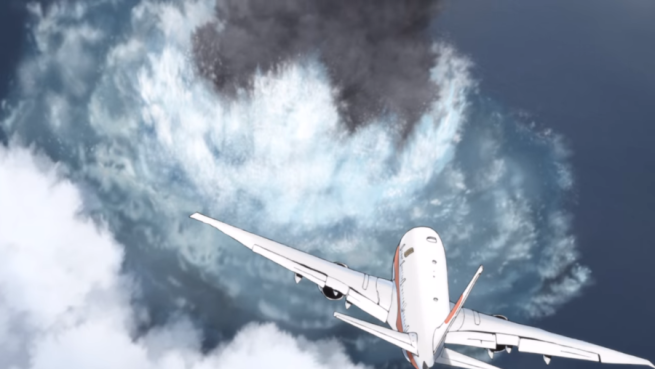 I really had to some research on this one, because i really wasn’t familiar with Japan Sinks in any of his incarnations, or even heard the name before, and i don’t feel this specific piece of japanese culture has spilled into the “manga/anime” western subcultures & communities in any significant way. Even more than usual, this is gonna be a review of the series in itself, given i really can’t make comparisons with previous incarnations of the novel.

That said, the title is direct and to the point, since the story focuses on the Muto family (and some close friends/acquaintaces), trying to survive in a Japan hit by a disastrous sequence of constant earthquakes and vulcanic eruptions, so catastrophic the japanese archipelago itself it’s sinking. Sounds like a pretty dramatic, realistic setting, since Japan’s history with earthquakes is quite well known and quite tragic, and this would led you to expect a grounded, realistic approach to the subject.

If anything, at least in this story the 2020 Tokyo Olympic Games actually happened, but i was really confused and unsure for a while, because they show the young school athletes training, and you may miss the line where they say “4 years from now you’ll represent your country, think about that!”, which implies the Olympic Games already happened that year, and so assume they were still  training for that year’s competition. It’s not that clearly stated, just saying.

With the comments and opinion i picked up around Twitter before watching the series myself, i expected the first or first two episode to hold up a facade of realism and then suplex my brain with random absurd shit that would be fun it if it wasn’t in a series with such a sour tone that tries to depict a huge tragic disaster and clearly wants to have it more grounded in the idea of “imminent/potentially coming danger”, given it’s not a recreation of old earthquake disaster, it’s posed to happen in the very year it’s released. 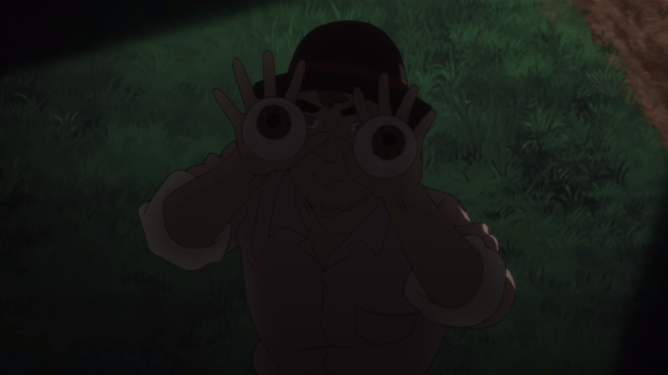 And i was.. partially right, as in took up to the fifth episode for thing to start getting weird, with the amazing  – but also absurd – scene where the grandpa uses bow and arrows to basically slay half the security staff of a communal-cultish city, doing 360° spins on his wheelchair to parry from bullets, which is both standout and unbelievable…. but also seems realistic when confronted with some of the stuff that actually happens, like a real medium and a paralyzed dude who can feel the earthquakes and eruptions, but he’s mute so he communicates in morse code by blinking.

Some of the stuff that doesn’t seem clear or doesn’t add up is eventually explained, but it can be confusing until then, and some of the stuff is never explained at all, it just happens, in an instance it feels like the writer really pulled something out of the ass in order to make the protagonists continue, i could elaborate more, but it would be necessary to go into big spoilers, so i’m not gonna.

This stuff is even more jarring because the series alternates between this and extreme but realistic survival situations, often with grim and tragic consequences, and Yuasa doesn’t shy away from showing corpses getting eaten by animals in details or pull punches when showing character dying (often with brutal, realistic swiftness).

Most of the time the show focuses on the more grounded aspect of surviving in such a scenario, and it works quite well but the plunges on bizzarre or confusing stuff like that are so sudden and still stick out like a sore thumb, alongside tragic consequences and some quite good emotional moments.

If anything, i’m glad we have Yuasa directing it, because he manages to make the narrative flow and work despite the warts in the script that challenge the notion of realistic disaster survivalism, almost make these realities almost all perfectly gel together, not all directors could have done so with a script that it’s mostly good but in not so few occasions decides to put random shit like that in. And if anything, it’s still an interesting half-mess, far from boring, you wanna know happens next for sure, and there is a good cast of interesting and well defined characters, with some quite good designs (stratchy as expected from Yausa and staff) to boot.

The other critique is the nationalism, and it’s a problem, but not in the way i expected. most of the survivors who are untrusting or hate foreigners are either reprimended (or worse) both in dialogue and in text, the family itself it’s not “white bread portrait” at all but also not defined by them not being your average japanese family (not that i really know how’s a typical modern japanese family), and the script really wants you to know this is not about being japanese or not… even if a character has to make the foreign-fixated brother and the others do a rap battle to get this futile fuss over with. This moment is really well meaning, but it’s also cringy and embarassing, just embarassing.

And still, especially with the ending, it’s hard to state there’s no patriotic “undertones” in a series called Japan Sinks, i mean, you kinda expect it to have a not so subtle message about how “Japan will rebuild again, spirit unbroken”, and how people are still emotional about their country regardless, but given other scenes are far from sympatetic to the way the goverment decides which citizens to save.. it’s a bit of a mixed bag, aside from the characters having some pride in representing their country at sports competitions, most of the “pro-Japan” stuff it’s a bit self-serving but not “nationalism”.

It’s not good either, but i guess it could be a relic from the novel that would be silly to flat-out reserve and make it self-deprecating to Japan and his citizen. Still feels a bit “eeeHH” regardless, but it’s not THAT bad. I could throw out examples, but certain series should remain sealed in obscurity, and i don’t want to inadvertedly give such crass shit some recognition. 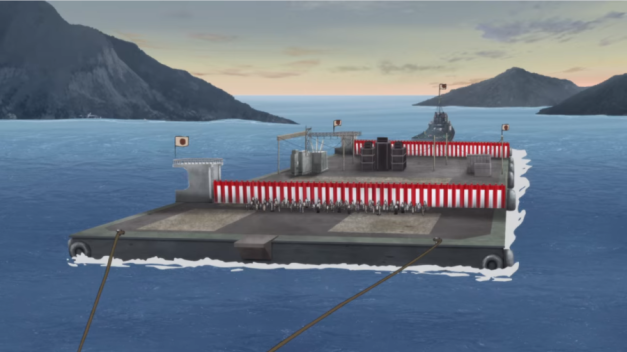 On less difficult subjects, animation is mostly consistent and good, the characters have that sketchy style often seen in Masaaki Yuasa’ works, some quite good visuals (and some very smooth sequences), but not much of his surreal stretching of the proportions, mostly some dream sequences where the young brother (with quite the interest in gaming) methabolizes events like they’re taking place in a faux MMO game. I guess the bizarre stuff actually happening (and NOT being a stylized visualization of what’s actually happening) in the narrarive compensates for that.

There is some weird composition of very light CG and traditional animation in some scenes, quite odd if brief sequences, and some animation sequences where the quality noticeably drops, most notably in episode 6, but aside from that, not much to point out.

Japan Sinks 2020 has definitely some issues.

While not really a weird choice for director Masaaki Yuasa and his Science Saru studio, as it features some recurring themes of his, and Yuasa is quite versatile, and his direction isn’t the problem here. If anything, i’m glad he’s directing it, because he manages to almost make it work seamlessly, despite having a series that stars with a firm grounding in reality and then halfway through nosedives in the territory of “earthquake sensitives” and people speaking with the dead, or otherwise subjecting the cast to some jarring stuff that’s ultimately never explained properly, if at all, or it’s just a thing that happens without much consequence.

It’s still worth seeing despite this, if anything because there are some quite good character and some really heartfelt moments, you wanna see them survive or try to, the narrative manages to still be intriguing also because you’re not fully sure what could possibly happen (not much in the way of gore, but Yuasa is certainly not shy about killing someone off, regardless of their status), and it’s not stretched out at all, actually, it’s a series with 10 episodes 24 minutes each. There are some embarassing moments and there definitely are some patriotic “under/overtones” (they’re not really that subdle), especially in the final episode, but while a bit cringy (at best), it never steer into actual nationalism or “troublesome territory”. Even if it tries a bit too hard to make you absolutely and definitely sure this isn’t propaganda or shit like that. Again, a bit cringy, but overall i’d say well meaning. I could be wrong (i totally could, i never knew this was based on a novel to begin with until i decided to make some research), but i’m not seeing THAT big of a problem i was led to believe. I’m not saying it’s a non-problem, but it’s not that big of an issue.

Even at the very least, I’d say it’s entertaining, decent, and with some good stuff in it, but the weird moments and not so small inconsistencies in tone (caused by stuff that comes out of left field and raises questions that are – mostly – never answered) made it kind of a mess, a well directed one, but still kind of a mess.

I’d say it’s fairly safe to conclude this is NOT the best work by Masaaki Yuasa or his Science Saru staff, but it’s not that bad either. Worth checking out if you have Netflix.

Probably Tokyo Magnitude 8.0 is better, but – as of now-  i wouldn’t really know.