After the expected success of Pirate Warriors (which is still the most profitable/successful series of One Piece videogames), Koei made another one the following year, also for PS3… and PS Vita as a japan only release.

The first thing to note is the story, who decides to go for the “alternate scenario” route (labeled Dream Log/Story), in order to implement story arcs not included in the first PW, while still setting all of this after the Marineford arc, making Pirate Warriors 2 a non-canonical follow up through and through. And since if follows after the non-canonical Marineford hidden stage ending as well, this means you have Ace still alive (at this point, i refuse to consider this a spoiler of any kind).

The story itself it’s about the Straw Hat pirate crew discovering some strange Dials (those shells with various functions found in Skypiea) that are activated when they reach Punk Hazard, and they release a purple haze that makes the crew go “evil” (complete with gleaming red eye), so Luffy and Nami are forced to retreat and team up with Smoker in order to accrue some new allies to resolve this crisis, which gives Moria and Blackbeard the idea to form an alliance.

Yeah, it’s that clichè of “allies turned evil by a gas/fume/bong mishap”, it’s so predictable as its resolution, but still, given the opportunities this scenario was ripe with, i feel they could have done more with it, besides odd, bastardized “canon salads” like the Blackbeard vs Ace fight, now in a very different context. Which is made even odder by the exclusion of some narrative arcs like Fishman Island, and the absence of beloved villains Doflamingo and Ceasar Clown, especially this one, the main baddie of the Punk Hazard arc, not even present in name on the Punk Hazard stage.

None that it matters since Pirate Warriors 3 would start again from the beginning, but it’s not Unlimited World R/Red, that one did a much better job of inserting old material into a new scenario and giving a proper reason for it in-game.

If you don’t particularly care for the story, then good, because gameplay wise Pirate Warriors 2 ditches the various types of stages with QTE puzzle and platforming, and instead it’s a proper Dynasty Warriors game, or more Samurai Warriors, actually, due to the emphasis on dodge-counters and the dropping of new objective and side missions during gameplay, which will sound familiar to long time Warriors fan: escort of characters who can start carpet bombings or map-wide effects, unlock closed door or remove obstacles, reinforcements, external factions who will join the conflict, FOW obscuring parts of the map, often taking in consideration the abilities of both ally and enemy characters to create clones for distraction (like Robin of Perona), the good stuff.

And i mean it, the map design is pretty damn good, retaining the base system capture found in the first Pirate Warriors (and the Dynasty Warriors Gundam series as well), and further taking elements from the Empires spin-off series, with linked bases/territories strenthening another one, small auxiliary outposts, bases that power up overall defense and attack or release more allied reinforcements. Maps are big, but not excessively so you won’t feel the need for mounts.

Characters now have altered, expanded or new movesets, especially the latter for the main Straw Hat crew, thought you can unlock their pre-time skip version with old movesets later on. Along with a character unique special attack/ability, you can also build up another bar and go in “Style mode”, which also bring altered combos or new moves specific to this mode, and allows you to see and hit character that would be otherwise impervious to normal attack due to their Logia devil fruit ability.

Styles come in two kinds: Offensive and Technical, the first buffing attack and making you not flinch from enemy attacks, the latter buffing speed and evasive manouver, and this goes for you as well for enemy generals and officials, which is good and makes this one more challenging than usual. Also, if you activate Style mode with a character gifted with the Ambition/Haki Of The Conqueror (an innate power in the One Piece universe), this will knock out any peons in the vicinity as well, a nice touch for fans.

The Style mode is alto tied to a revised version of the Crew Strike support attack (the one found in the first PW has been scrapped here), where you can build up another bar and get to control the allied character (if it’s playable) for a short period of time, which culminates in a combination musou, and helps raising the morale/affection gauge, which can grant extended Crew Strike time, more damage in this state/mode, etc.

Thankfully revised is the coins systems, which in the first one where equippable items to increase stats or buff abilities with specific combinations relating to item and character relations in the One Piece series, here they do that but unlocking abilities is done via a bingo-like system, which tells you what coins you need to unlock said abilities/ combos/ buffs, much easier to understand than before, and overall better, since getting specific coins isn’t about the RNG randomly deciding you could get it after grinding for hours. You still get money from winning battles, but you can actually use it for something besides music tracks, artworks and concept art, as you can buy level ups for characters, as high as the level of the stronger character unlock. 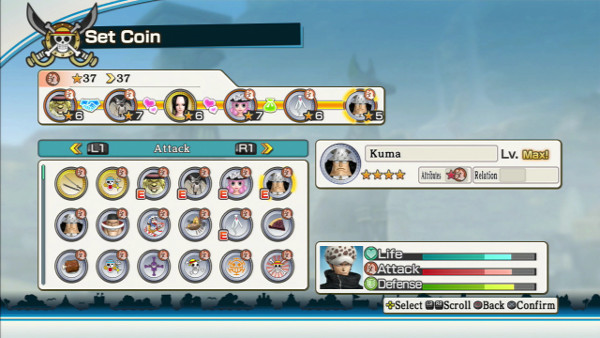 And because this game is before the “microtransactions-calypse”, yeah, it’s in-game money, like a fuckin actual videogame made for you to enjoy it.

On the technical side, it’s sports noticeably more enemies on screen than the fist Pirate Warriors, with very little in the way of slowdowns, mostly in extremely busy moments. This is paid with some medium enemies models that don’t appear until they’re close, despite the game clearly acknowleding they exist, as you can lock-on to them. Cel shading is a bit better, but for some odd-reason the in-game character models used by some cutscenes look worse than they actually are during gameplay.

And being a numbered follow-up sequel for an Omega Force musou, it means also that many character models and assets are reused, but there are also many new maps and scenarios, and even maps that are taken from the first PW (like Drum Island) have a completely different scenario and events, but on the other hand you’d wish they used the non-canonical story to insert some forgotten arcs, like the Davy Back Fight one, or let you play as more villain characters, given how much the maps love to throw the CP9 or Gekko Moria (who wouldn’t become playable until PW 3) at you.

There are new playable characters, and the roster size it’s almost tripled from the first game, for a total of 36 playable characters, but excitement is a bit dampered when you realize that 9 are the old versions (with the old movesets) of the Straw Hat’s crew, but still, the new entries like Eneru, Perona, Mihawk, Marco and Garp are quite fun to use and have unique gimmicks and playstiles, and you’re encouraged to keep playing after the 8 hours long story mode is beaten, because you’ll still have only half the roster.

To unlock all characters, you’ll have to complete the Companion Episodes, which let you battle and recruit a character for a Crew Strike, be it a playable one or be it a boss enemy/general, and you’ll need to complete certain episoded before unlocking other, which give it more replay value and is mandatory to see the true ending. My only gripe here is that the episodes are often just one map and that’s it, but it’s definitely a meatier experience (with both local and online co-op play), even if once again the Challenge mode is kinda barren without DLCs, which comprehended challenge maps and some costumes, but were all silently delisted years ago from PSN (along the game itself, which is a bummer), oddly enough even before the DLC for the original Pirate Warriors.

With the foundations already laid by the previous title, Pirate Warriors 2 does exactly what you want from a musou sequel, with more maps, more playable characters, more systems to make you grind to the heavens and rack up that kill count in the thousands with your favourite (and not so favorite) characters from Eiichiro Oda’s beloved pirate shonen series, here throwing canon to the winds in favour of an original scenario that i strongly feel was made just because Koei was too cheap to license all the story arcs in the first Pirate Warriors. Wouldn’t be the first time.

Sadly, despite this, the story is easily the weakest part of the game, as Omega Force had cart blanche to mess and rearrange story arcs from One Piece, and the best it could come up with it’s a Blackbeard-Moria alliance, which isn’t bad per se, but it’s manufactured via the laziest plot device in the book: the strange tool that makes allies turn evil (complete with purple aura and evil red gleaming eye) via a brainwash gas, that kind of contrived bullshit. Still, the plot it’s definitely entertaining fan service for One Piece fans, if for no one else (if you care about the license, that is).

Gameplay is quite the opposite, even if it completely abandons all those lite platforming/puzzle/action with QTE sequences in order to just be a regular Dynasty Warriors (or in this case, more Samurai Warriors) experience, but a pretty dang good one, with good map design that use most of the appreciated elements familiar to fan of the genre, and does more than just apply an One Piece skin to a Warriors game, with systems that take into consideration Haki and Devil Fruits’ abilities, and take more cues than before from the Empires’ series, with linked bases and stuff.

It’s also a more meatier experience, with more replayibility, a less insane drop rate for coins used to boost and unlock abilities… even if you’d still wish Koei was less cheap, as they could have put more story arcs and made playable more boss enemies that are part of the ol’ asset recycle job (like, Arlong, and Moria, the only one of the Seven Warlords of The Sea NOT playable here) and were present in the first title. Still, it’s a pretty damn good musou title, a notable improvement over the first, and on this regard – if you’re looking to get or import it – you may still be able to find a two-pack for the first two Pirate Warriors titles.