Like it’s so often the case, i got this one on DVD for cheap, and the UK DVD release tries to fool you into thinking that’s related to (or part of) the Mega Shark series by The Asylum, even putting “the legend returns…” in the box art.

It’s actually not, it’s just a random shark movie called Malibu Shark Attack, that also just happens to have been released in 2009 like the first Mega Shark movie, Mega Shark VS Giant Octopus, but by this logic, Black Dynamite and Dragon Ball Evolution also belong in the Dinocroc shared universe. This is actually part of the Maneater series, though calling it series it’s a stretch, they are cheap horror films produced by RHI Entertaiment for SYFY (usually debutting there and then going to video), yes, but they don’t even stick to the theme of “natural horror” anymore. Not that it really matters.

Doesn’t help that this release still keeps the alternative DVD title of “Mega Shark Of The Malibu” in the movie itself, but it wouldn’t be a genre film without at least 2 or 3 alternate titles, i guess. It’s one of the unwritten laws of b movies and such.

This movie does have a stand out feature, though, as in they didn’t go for the usual great white shark or the megalodon… not exactly, they are still an ancient type of shark, a living fossil, but an odd one i had never seen or heard of before this movie: goblin sharks. Called so for their protruding nose/beak and the protruding jaw with nail-like teeth, they are pretty much abyssal dwelling sharks, quite an interesting choice, i gotta hand this to the movie. But yeah, on the other hand this just shows how satured is this shark movie subgenre, if you do gotta search for these types of sharks to stand out. Plot is otherwise fairly typical, as the sharks are freed/awakened by an underwater tremor (6 sharks this time), and a tsunami arriving on the horizon forces lifeguards to barricade themselves in the lifeguard station. They later unite with another group of construction workers that didn’t escape when the tsunami alert hit. And – as the synopsis on the back of the UK DVD release promises– there is a chainsaw at somepoint. An industrial chainsaw, but still, you gotta welcome every chainsaw you get in these movies, and this actually pre-dates Sharkenado and its iconic final scene.

That aside, nothing special with either the script or the characters, but you can tell it was made before the days of total sharkxploitation, as in there is some legit tension, something to it,direction by David Lister makes the movie work and maintain decent momentum, the characters aren’t memorable but are fairly reasonable, there’s no random douche acting like one for the sake of having this archetype or someone acting like an idiot just so we can thin out the cast (aka the “want out” option for actors in these movie), there are a good number of kills regardless, some fun action scenes, especially at the end where they wail on these goblin sharks. On this subject, while the sharks are in a not particularly good CG, it’s still better (in some cases a LOT better) than what you usually see in 2010’s shark flicks, there are some decent practical effects and some physical props for the sharks.

The movie stars Peta Wilson (Femme Fatale Nikita) and Warren Christine, the cast is mostly made of canadian and australian TV and movie actors (figures, this being a canadian-australian production), but it’s a decent cast overall, and you may actually recognize most of them without searching on IMDB first. Clearly no one it’s bringing their best, but the overall acting it’s fairly ok, of course looks stellar compared to some of the shit we featured here, still, there is some effort, they don’t completely phone it in.

Again, nothing particularly enthralling regardless, but this is one of the “kinda decent” ones, one of the better shark flicks, definitely of the ones that actually try to be a thriller-horror (and have some decent-good production values) instead of absolute cheesefest with elemental mystics ready to unleash storms of… djinn sharks on some dumb and sleazy frathouse that decided to “PARTEEEEEEI HARD” on a cursed volcanicc isle ready to erupt or something. Feel free to take these ideas, Asylum, it’s on the house. 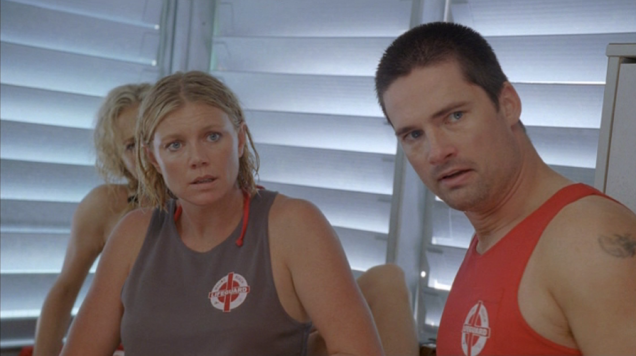