Here’s another quite nostalgic OVA, as in 2008, for its 40th Anniversary Shonen Jump held the Super Anime Tour, and Toei was commissioned a recreation not of One Piece, but of Romance Dawn, the one-shot story (the first version, in this specific case) Eiichiro Oda created and that eventually served as a base for One Piece, not only in premise but also character designs, and became a naming convention, so much that the first One Piece chapter is titled “Romance Dawn” as well.

The overall plot remains pretty much unchanged, as Luffy arrives in a town menaced by the Crescent Moon Pirates, shows off his Gum Gum ability, mentions Shanks, and tries to help a local girl named Silk to chase the evil pirate captain, Gally, but they mistaken Luffy for the guy and rope him. Silk saves the tied up Luffy from drowning after he gets thrown in the sea, Gally bombards the village, Luffy fight Gally and easily defeats him, then gives Gally’s loot to the townspeople so they can rebuild the shops, etc.

The main difference is the context, as in this supposedly happens somewhere after Thriller Bark but before the Sabaody Archipelago arc, since all 9 Straw Hat crew members are here (but Luffy is by himself for most of the OVA anyway, for story reasons), Gol D. Roger face is not obscured (meaning this OVA in particular used the manga and NOT the anime as bases, since by that arc Roger’s face was fully revealed), there’s no concept of the Peace Mains and Morganeers type of pirates (thank christ), and Luffy uses Gear 3rd to finish Gally off.

Also, since Nami is here, Silk’s design was changed, it kinda had to, as she basically looked like a Nami-Tashigi hybrid without glasses in the original manga one-shot/pilot, but even so it not saying much since it’s not a drastic change and Oda’s female designs are Nami, Robin, or Big Mom, let’s be honest with ourselves. Even Galley’s ship design was altered, it was supposed to make Luffy mistake it for the one Shanks and his crew had, but doesn’t make much sense in this context.

It’s a fairly extensive episode, clocking in at 34 minutes, Silk’s background makes for a little nice story, even if the new context makes Luffy behavior a bit strange and deliberate (he really could have kicked Gally’s ass easily midway, even tied), since it has to follow the original plot of the one-shot. And frankly it’s nothing special, even if you didn’t know this is a recontextualized adaption of a One Piece prototype, it’s not that great a story, but it’s not bad either, and it does carry the same type of conflict and atmosphere seen in the early story arcs of One Piece.

So, even with this different context, it feels like it was always a part of the series.

Not much to say about the animation, it looks like the TV series as you’d expect, fairly pretty good work by Toei as usual, and there are no weird composition or frames were the character look featurless even in medium shots. Plenty of cameos for fans, like random Pandaman escaping in the crowd and some very minor background characters from early story arcs appearing in the ending.

Like most OVAs, featurettes and assorted One Piece media that isn’t the series or the movies, it was never officially released outside of Japan, but it had both a theathrical release and a home video release on DVD, order by email only.
So you know where to go and what to do. 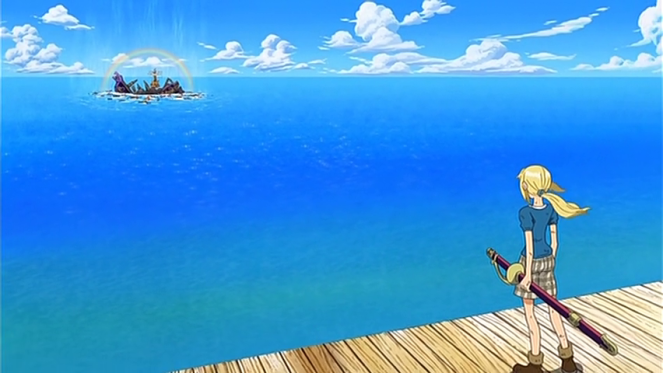 But – as they say- the time isn’t quite right… yet.